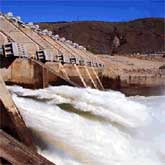 Flowing water creates energy that can be captured and turned into electricity. This is called hydropower. Hydropower is currently the largest source of renewable power, generating nearly 10% of the electricity used in the United States. The most common type of hydropower plant uses a dam on a river to store water in a reservoir. Water released from the reservoir flows through a turbine, spinning it, which, in turn, activates a generator to produce electricity. But hydropower doesn't necessarily require a large dam. Some hydropower plants just use a small canal to channel the river water through a turbine.

Hydropower facilities in the United States can generate enough power to supply 28 million households with electricity, the equivalent of nearly 500 million barrels of oil. The total U.S. hydropower capacity--including pumped storage facilities--is about 95,000 megawatts. Researchers are working on advanced turbine technologies that will not only help maximize the use of hydropower but also minimize adverse environmental effects.