New Ideas About An Old Puzzle 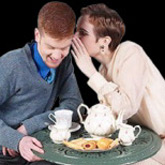 There's a familiar way of talking about language as a 'tool,' but of course that's just a metaphor. Literal tools made of rock can last for millennia as evidence of the skills of early humans. Not so with the metaphorical tool of language. Plumbing the origins of language is more like investigating the evolution of empathy than it is like studying the development of flint-knapping skills.

Leaving aside the questions of how and when language evolved, can we at least say why it did? University of Liverpool evolutionary psychologist Robin Dunbar proposes that, for humans, gossip serves the same social function as grooming does for other primates. He has identified a clear correlation between primate social group size and brain size -- or, more precisely, the ratio of neocortex to the rest of the brain. The size of the human brain points to a natural social group of about 150. That just happens to be the typical size of human hunter-gatherer groups from prehistoric times to the present.

On the one hand, a larger social group would have provided a significant survival advantage. On the other hand, in a group of 150, so much time would be spent grooming that there would be little time for anything else. By Dunbar's view, social group size drove the development of both brain and language in humans, with significantly greater intelligence required to keep track of social relationships in a larger group. Language, then, came to provide a more efficient mode of nit-picking and took over the grooming function, allowing for more efficient, less time-intensive bonding and thus permitting the existence of larger groups.