Throw Out Your Thermometer 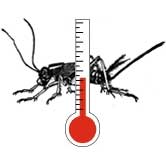 If you're out camping, and you've left your favorite thermometer at home, how can you figure out the temperature? Not the most earth-shaking problem, we admit, but there is an all natural way to find out the air temperature. Listen to a cricket.

Just count the chirps of the common snowy tree cricket (Oecanthus fultoni) for fifteen seconds and add 40. This will give you a pretty close approximation (usually within one degree) of the ambient temperature in Fahrenheit degrees. For Celsius, count for eight seconds and add 5. The trick works with other crickets as well, with a little tweaking of the numbers.

Only male crickets make the familiar chirping sound. Some say it's by rubbing their legs together; some say it's their wings. Like all anthropoids, crickets are cold-blooded, and hence their metabolism is directly affected by their body temperature. As their body temperature goes down, their metabolic rate goes down, and so does the rate of their chirping. As the temperature warms up, the rate of chirping picks up too. What is so interesting is that in order to be an effective gauge of temperature, all male crickets must be chirping at the same rate, which means a very tight relationship between the insect's metabolic rate and the ambient air temperature.