A Satellite Of Our Own 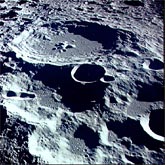 The regular daily and monthly rhythms of Earth's only natural satellite, the Moon, have guided timekeepers for thousands of years. Its influence on Earth's cycles, notably tides, has also been charted by many cultures in many ages. More than 70 spacecraft have been sent to the Moon; 12 astronauts have walked upon its surface and brought back 382 kg (842 pounds) of lunar rock and soil to Earth. The presence of the Moon stabilizes Earth's wobble. This has led to a much more stable climate over billions of years, which may have affected the course of the development and growth of life on Earth.

From Earth, we see the same face of the Moon all the time because the Moon rotates just once on its own axis in very nearly the same time that it travels once around Earth. This is known as 'synchronous rotation.' Patterns of dark and light features on the nearside have given rise to the fanciful 'Man in the Moon' description. The light areas are lunar highlands. The dark features, called maria, are impact basins that were filled with dark lava between 4 and 2.5 billion years ago. After this time of volcanism, the Moon cooled down, and has since been nearly unchanged, except for a steady rain of 'hits' by meteorites and comets. The Moon's surface is charcoal gray and sandy, with much fine soil. This powdery blanket is called the lunar regolith, a term for mechanically produced debris layers on planetary surfaces. The regolith is thin, ranging from about 2 meters on the youngest maria to perhaps 20 meters on the oldest surfaces in the highlands.

Unlike Earth, the Moon does not have moving crustal plates or active volcanoes. However, seismometers planted by the Apollo astronauts in the 1970s have recorded small quakes at depths of several hundred kilometers. The quakes are probably triggered by tides resulting from Earth's gravitational pull. Small eruptions of gas from some craters, such as Aristarchus, have also been reported. Local magnetic areas have been detected around craters, but the Moon does not have a magnetic field resembling Earth's. A surprising discovery from the tracking of the Lunar Orbiter spacecraft in the 1960s revealed strong areas of high gravitational acceleration located over the circular maria. These mass concentrations (mas-cons) may be caused by layers of denser, basaltic lavas that fill the mare basins. Much remains to be learned about our Moon. Researchers continue to study the samples and data returned by Apollo and other missions, as well as lunar meteorites.