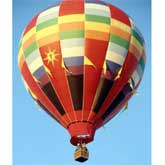 The word aeronaut is derived from the Greek terms 'aero' meaning air or atmosphere and 'nautes' meaning sailor. Originally, individuals who piloted balloons or airships (blimps or dirigibles) were called aeronauts. In the spring of 1783, Joseph Michel and Jacques Etienne Montgolfier, who owned a paper mill near Lyon, noticed a shirt that had been hung out to dry over a fire. It billowed upward and looked as if it had inflated. They studied the ascending force of the smoke and came up with the idea that if they enclosed what they considered to be this special gas in an 'envelope', the bag would rise from the ground. They experimented with paper bags from their mill over fires made from varying materials. Coining the term 'Montgolfier gas' the smoky air created from a fire of straw and wool, they inflated larger and larger balloons.

On September 19th, 1783 the Montgolfiers put a sheep, a duck, and a rooster in a tethered balloon to determine if animals could survive at heights. The experiment occurred at the palace at Versailles and was witnessed by King Louis XVI, his court, and some 130,000 astonished spectators. The no doubt terrified 'passengers' were in flight for 8 minutes and traveled almost 2 miles. Two astronomers calculated the balloon's altitude to be 1700 feet. The king was delighted and demanded more of this wonderful amusement. On October 15th Francois Pilatre de Rozier, a professor of chemistry, went up in a Montgolfier balloon, again tethered. The balloon was oval shaped about 49 feet wide and 78 feet high. De Rozier ascended to a height of 85 feet. This event is considered to be the first manned lighter-than-air flight.

On November 21st, in the same Montgolfier balloon that had taken the animals up, the two-person crew of de Rozier and the Marquis d'Arlandes made the first free flight not tethered to the ground. They traveled more than 5 miles across the city of Paris and reached a height of 3000 feet. Twenty-five minutes after take-off, they allowed the fire to subside and landed gently between two mill houses. D'Arlandes wrote later how surprised he was by the silence and the absence of movement among the spectators. Apparently (and rightfully) they were stunned. Practical air travel had begun.