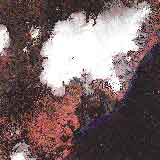 Glaciers are massive sheets of ice that occur on every continent of the world except Australia. These giant ice slabs have a humble beginning, as the tiny snowflakes in winter precipitation that accumulate on the ground into a bank of deeper and deeper snow. In the right environment, with year-round cold temperature, regular snowfall, and little melting of the snow pack, the pack begins to compress under its own weight and becomes harder and harder. Skiers know that hard-packed snow is more granular than powder. As more snow accumulates, the process continues with the snow forming into larger and larger ice crystals. The greater and greater weight forces the air out of the snow pack. Over time, the ice crystals, formed by the massive weight, begin to distort and flow, following the contour of the land.

Although most glaciers move very, very slowly, under the right conditions a glacier can retreat or advance several yards a day. Glaciers have been called rivers of ice and this is a fitting name, for they do act like water. There are even ice falls and ice pools.