Math On the Mind 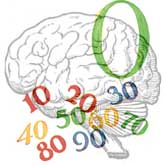 In the mid-1800's, Paul Broca discovered that there were specialized functions for different regions in the human brain. He identified the third gyrus (the ridges on the surface of the cerebral cortex) of the prefrontal lobe as the center for speech production (later referred to as 'Broca's Area'). There is 'domain specificity' in the brain, which creates adaptive modules with their own exclusive networks that make specific skills or abilities possible, including the understanding of numbers and numerical quantities. There are areas of the human brain clearly devoted to 'number sense,' arithmetic computation and general mathematics processing. The specific domain for math lies in the lower (inferior) areas of the left parietal lobe in the posterior convolution (crevice or valley on the brain's surface) known as the 'angular gyrus.'

Regional brain damage, strokes, demyelination (a reduction in the coating surrounding an axon, the signal-sending portion of brain cells) or imprecise development of the neural connections in this 'math area' can lead to problems with number sense. Learning and remembering numbers, quantities and their representations will become unusually difficult. Even animals have a rudimentary sense of number including that helps them establish comparisons of two quantities to make approximations concerning quantities of objects in front of them.

Just as there are individuals whose reading experiences are interrupted by bouts with dyslexia, they have counterparts in the world of mathematics, who are afflicted with 'dyscalculia' and 'acalculia,' which are the mathematical equivalents of dyslexia and color blindness.