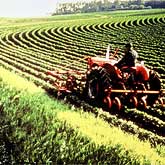 Nitrogen is a very interesting element. It is the seventh element of the periodic table, with seven electrons in its atoms. The somewhat unique combination of electronic structure and small atomic size makes it possible for as many as five of its electrons to be involved in bonding with other atoms. Nitrogen bonds very readily with other atoms to produce a bewildering variety of compounds, and is one essential component of amino acids, which are necessary for all life as we know it. Fortunately, there is no shortage of nitrogen in the world; the air that surrounds the planet is about 78% nitrogen. But there is a huge difference between the nitrogen we breathe and the nitrogen in amino acids.

All life on this planet and probably wherever else there is life in the universe, owes its continued existence to a few varieties of bacteria that live in the soil. These are the 'nitrogen fixing' bacteria. Part of the life process of these bacteria is to 'fix' or 'tie down' free nitrogen gas from the air by converting it into atomic forms that can be taken up and used by plants and other organisms. Nitrogen-fixing bacteria use an enzyme-catalyzed biochemical process to carry out this conversion. Plants then use the fixed nitrogen to produce chlorophyll and other nitrogen-containing compounds. Animals that eat the plants thus acquire that nitrogen and use it to build amino acids and proteins, and life goes on.