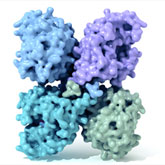 Proteins form our bodies and help direct its many systems. Proteins are fundamental components of all living cells. They exhibit an enormous amount of chemical and structural diversity, enabling them to carry out an extraordinarily diverse range of biological functions.

Proteins help us digest our food, fight infections, control body chemistry, and in general, keep our bodies functioning smoothly. Scientists know that the critical feature of a protein is its ability to adopt the right shape for carrying out a particular function. But sometimes a protein twists into the wrong shape or has a missing part, preventing it from doing its job. Many diseases, such as Alzheimer's and 'mad cow', are now known to result from proteins that have adopted an incorrect structure.

Identifying a protein's shape, or structure, is key to understanding its biological function and its role in health and disease. Illuminating a protein's structure also paves the way for the development of new agents and devices to treat a disease. Yet solving the structure of a protein is no easy feat. It often takes scientists working in the laboratory months, sometimes years, to experimentally determine a single structure. Therefore, scientists have begun to turn toward computers to help predict the structure of a protein based on its sequence. The challenge lies in developing methods for accurately and reliably understanding this intricate relationship.