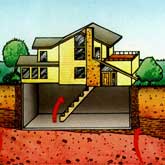 To the best of our knowledge, the entire universe is constructed from just over a hundred different types of building blocks called atoms. Each has its own characteristic properties, and while there are dangers associated with each and every one of them, it seems that the rarer the element, the more serious are its effects. Such is the case with the element we know as radon. The eighty-sixth element in the periodic table, radon is a member of the group of elements known as the 'noble gases'. The atomic weight of radon is 222 atomic mass units (amu, or Daltons), making it the heaviest gas known. Radon is a readily compressible gas, becoming liquid at -62(C, and then a glowing solid at -71(C. Why does solid radon glow? Radon is a radioactive element formed by the decay of the element radium. The glow is 'Cerenkov radiation', light produced as charged subatomic particles with fairly high energies pass through and interact with their immediate environment.

Therein lies the inherent danger associated with radon gas, and other radioactive elements. We tend to think of elements like radium and uranium as only found in mineral ores. The truth is that they are found throughout the world at very low levels. The mineral ores from which they are refined for industrial uses represent only very minor pockets in which nature has somehow concentrated those elements. Because radium is thus found everywhere, radon gas is similarly widespread. Radioactive decay is a continuous process, so new radon is always being produced to add to the environment. The vast majority of the radon that is produced remains securely trapped below ground in the soil and rock in which it was formed, where it poses little or no threat. What radon gas does escape from the soil is usually safely dispersed through the action of wind and rain.

There are regions of the Earth, though, in which the wind does not blow and the rain does not fall, and where underground water sources provide a path for radon gas to come to the surface and collect in higher-than-normal concentrations. These are the basements and cellars of the houses and other buildings in which we live, work, and play. Concrete, clay bricks, and other mineral-based building materials have the effect of concentrating or increasing the amount of radon gas produced in these areas. Normally, buildings with good air exchange, especially in the portions below ground level, do not have a problem with the build-up of radon gas. The flow of air removes the radon gas as it is produced. Where air flow is a problem, however, radon gas can accumulate. It should go without saying, then, that where radon gas is concerned, an ounce of prevention is invaluable. An adequate exchange of fresh air removes any radon gas that may collect, as well as the risk associated with exposure.