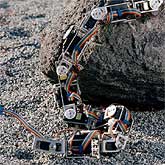 Early robots were stiff, clumsy machines that plodded in straight lines. More modern robots can be radio controlled and move with much more grace and precision. Snakebots, though, can weave through narrow passageways, inspect hard-to-reach areas, coil around pipes, and climb from one structure to another. In rugged terrains where wheels would be impractical, snakebots won't tip over or get bogged down.

What exactly is a snakebot? Gary Haith, head of the Serpentine Robotics Project at NASA Ames Research Center in California, says that a snake robot is a power tool that can crawl to a job site on its own, parts in tow, and then carry out its assigned task. The snakebot's structure is an engineer's dream: it's easy to modify and repair because it's a repeating series of hinged segments. Think of an electric train: just add on as many cars as you want, and take off any you don't need. That's how a snakebot is arranged. Some of the modules on a snakebot can be duplicates. That way, if one area develops a problem, a new element can be snapped into its place. That makes maintaining and repairing the robot very manageable, especially in space where a repair shop isn't handy.