Why Don't We Try To Destroy Tropical Cyclones? 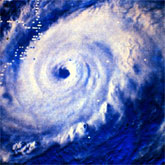 There have been numerous techniques that we have considered over the years to modify hurricanes: seeding clouds with dry ice or Silver Iodide, cooling the ocean with cryogenic material or icebergs, changing the radiational balance in the hurricane environment by absorption of sunlight with carbon black, blowing the hurricane apart with hydrogen bombs, and blowing the storm away from land with windmills, etc. As carefully reasoned as some of these suggestions are, they all share the same shortcoming: They fail to appreciate the size and power of tropical cyclones. For example, when Hurricane Andrew struck South Florida in 1992, the eye and eyewall devastated a swath 20 miles wide. The heat energy released around the eye was 5,000 times the combined heat and electrical power generation of the Turkey Point nuclear power plant over which the eye passed. The kinetic energy of the wind at any instant was equivalent to that released by a nuclear warhead.

Human beings are used to dealing with chemically complex biological systems or artificial mechanical systems that embody a small amount (by geophysical standards) of high-grade energy. Because hurricanes are chemically simple --air and water vapor -- introduction of catalysts is unpromising. The energy involved in atmospheric dynamics is primarily low-grade heat energy, but the amount of it is immense in terms of human experience. Attacking weak tropical waves or depressions before they have a chance to grow into hurricanes isn't promising either. About 80 of these disturbances form every year in the Atlantic basin, but only about 5 become hurricanes in a typical year. There is no way to tell in advance which ones will develop. If the energy released in a tropical disturbance were only 10% of that released in a hurricane, it's still a lot of power, so that the hurricane police would need to dim the whole world's lights many times a year.

Perhaps some day, somebody will come up with a way to weaken hurricanes artificially. It is a beguiling notion. Wouldn't it be wonderful if we could do it? Perhaps the best solution is not to try to alter or destroy the tropical cyclones, but just learn to co-exist better with them.