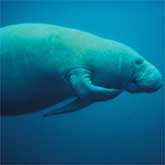 Christopher Columbus was the first European to report seeing a manatee in the New World. To Columbus, and other sailors who had been at sea for a long time, manatees were reminiscent of mermaids -- the mythical half-fish, half-woman creatures of the ocean. Manatees are not fish, however, but marine mammals. The West Indian or Florida manatee (and sometimes called sea cow) is found primarily along the coast of Florida. Most adult manatees are about 10 feet long and weigh 800 to 1,200 pounds, although some larger than 12 feet and weighing as much as 3,500 pounds have been recorded. These 'gentle giants' have a tough, wrinkled brown-to-gray skin that is continuously being sloughed off. Hair is distributed sparsely over the body. With stiff whiskers around its mouth, the manatee's face looks like a walrus without tusks.

The manatee maneuvers through the water moving its paddle- like tail up and down and steering with its flippers. It is very agile for such a large animal, sometimes somer-saulting and doing barrel rolls in the water. The manatee often rests suspended just below the water's surface with only the snout above water. It feeds underwater, but must surface periodically to breath. Although the manatee can remain underwater for as long as 12 minutes, the average time is 4 1/2 minutes. Manatees are herbivores, meaning they eat only plants. But they eat a great variety of aquatic plant species, including water hyacinth and hydrilla. Manatees must eat 4 to 9 percent of their body weight each day. That's at least 32 pounds of plants per day for an 800-pound manatee! To do this, they spend 5 to 8 hours a day eating.

Manatees spend their lives moving between freshwater, brackish, and saltwater environments. They prefer large, slow- moving rivers, river mouths, and shallow coastal areas such as coves and bays. Great distances may be covered as the animals migrate between winter and summer grounds. During the winter, manatees congregate around warm springs and power plants that discharge warm water. During summer months, they have occasionally been seen as far north as Virginia and Maryland. Manatees communicate with each other by emitting sounds underwater that are audible to humans. The vocalizations, which sound like squeaks and squeals, are especially important for maintaining contact between mother and calf. The manatee was listed as an endangered species in 1967 meaning it is considered in danger of extinction throughout all or a significant portion of its range. The manatee also is protected at the federal level under the Marine Mammal Protection Act of 1972.