What Powered the Big Bang? 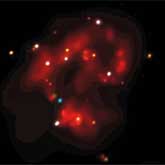 During the last decade, sky maps of the radiation relic of the Big Bang---first by NASA's Cosmic Background Explorer (COBE) satellite and more recently by other experiments, including Antarctic balloon flights and NASA's Wilkinson Microwave Anisotropy Probe (WMAP)---have displayed the wrinkles imprinted on the Universe in its first moments. Gravity has pulled these wrinkles into the lumpy Universe of galaxies and planets we see today. Yet still unanswered are the questions: why was the Universe so smooth before, and what made the tiny but all-important wrinkles in the first place?

Measurements by missions of the Beyond Einstein program could separate these different contributions, allowing us to piece together the story of how time, space, and energy worked together to power the Big Bang.