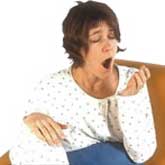 Narcolepsy is a sleep disorder than affects about 1 of every 2000 people worldwide. It usually starts in the teens or twenties, but it may begin in childhood. People who have it fall suddenly and unpredictably into brief periods of deep sleep-- sometimes as many as 20 times a day--even if they have slept well the night before. Their 'sleep attacks' can be as short as 30 seconds or as long as 30 minutes. Perhaps half of all narcoleptics experience vivid hallucinations associated with sleep onset. A similar number may experience temporary paralysis just before falling asleep or when waking. Strong emotion or excitement triggers cataplexy in some narcoleptics. Muscles go limp, and the narcoleptic collapses, with arms and legs paralyzed, while still conscious and aware.

In 1999, Emmanuel Mignot and his colleagues at Stanford University in California discovered a gene associated with narcolepsy. Studying narcoleptic dogs, they found a mutant gene that left the dogs' brain cells devoid of receptors for hypocretin (also called orexin). Hypocretin is an important neurotransmitter. It stimulates the brain's arousal centers, maintaining wakefulness. Without it, sleep onset is sudden and uncontrollable.

A genetic defect of the hypocretin system has been found in some, but not all, people with narcolepsy. In some, hypocretin is not made in adequate amounts. Others lack, as did Mignot's dogs, receptors for hypocretin on the surfaces of certain nerve cells in their brains. In other narcoleptics, the immune system may mistakenly attack and destroy either the cells that make hypocretin or those that receive it. Narcolepsy can't be cured, but it can be treated with stimulant drugs that promote wakefulness, naps that alleviate fatigue, and drugs that activate hypocretin-containing neurons and suppress sleep.