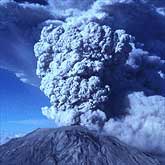 Most global temperature change occurs over a long period of time, centuries rather than years, and in small increments. But in 1816, the Northeastern part of the United State and Northern Europe were hit with successive cold fronts that brought snow and ice, and dropped temperatures almost to the freezing point. Spring started out cold, but by June of 1816, the weather warmed up, and farmers began planting their summer crops. On June 5th, a blast of dry arctic air brought summer temperatures back to winter levels in a matter of hours. That cold snap lasted about five days and was followed by several more during the summer, even bringing snow and ice in August. So what would explain a year without a summer?

Meteorologists point their fingers at a series of very active volcanoes that spewed an estimated million plus tons of volcanic dust and ash high into the atmosphere between 1812 and 1816. The worst eruption was at Mount Tambora in the Dutch East Indies in the spring of 1815. It was so violent that the explosion was heard almost a thousand miles away (about 1600 km).

Once airborne, volcanic dust particles in the atmosphere take years to fall back to the ground, and by their nature, are very good at reflecting sunlight while at the same time allowing heat to escape from the ground and lower atmosphere. It may only have an affect of a degree or two on average, but even small variations can wreak havoc with the weather worldwide. The summer of 1816 taught the cold, hard facts about the interaction of volcanoes and the global climate.