Mother Nature's Own Brand of Bioterror 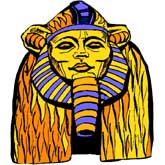 We've been hearing a lot about smallpox lately, as a possible bioterror attack. But Mother Nature has her own brand of bioterror. Smallpox has been with us for about ten thousand years, since the earliest agricultural settlements in Africa. From there it spread to Egypt and on into Europe and Asia. Smallpox victims have a high fever, ache all over, and get a terrible rash that usually leaves disfiguring scars. Often the rash spreads to the eyes, leading to blindness. As many as half of the victims die.

Pharoah Ramses V of Egypt appears to have died of smallpox, as his well-preserved mummy shows the characteristic scarring. The Greek historian Thucydides noted that people who survived smallpox were later immune to it (but the Greeks did not invent vaccination). Epidemics of smallpox hastened the decline of the Roman empire.

But the most catastrophic smallpox epidemics befell the natives of the New World, for smallpox had not reached the Western Hermisphere until the Europeans brought it in the 15th century. The native americans, having no experience with it, had no resistance and died by the thousands. Since none of them had ever had it before, nobody was immune, and everybody in the community got sick. It is thought that as many as 90% of the native american population died of European diseases, including smallpox.