What Causes The Blue Color That Sometimes Appears In Snow And Ice? 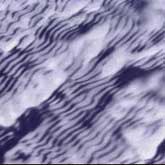 Generally, snow and ice present us with a uniformly white face. This is because most all of the visible light striking the snow or ice surface is reflected back without any particular preference for a single color within the visible spectrum. The situation is different for that portion of the light which is not reflected but penetrates or is transmitted into the snow. As this light travels into the snow or ice, the ice grains scatter a large amount of light. If the light is to travel over any distance it must survive many such scattering events, that is it must keep scattering and not be absorbed.

The observer sees the light coming back from the near surface layers (mm to cm) after it has been scattered or bounced off other snow grains only a few times and it still appears white. However, the absorption is preferential. More red light is absorbed compared to blue. Not much more, but enough that over a considerable distance, say a meter or more, photons emerging from the snow layer tend to be made up of more blue light than red light. Typical examples are poking a hole in the snow and looking down into the hole to see blue light or the blue color associated with the depths of crevasses in glaciers. In each case the blue light is the product of a relatively long travel path through the snow or ice. So the spectral selection is related to absorption, and not reflection as is sometimes thought.

The National Snow and Ice Data Center is a United States information and referral center in support of polar and cryospheric research.