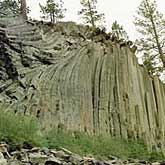 Established in 1911 by presidential proclamation, Devils Postpile National Monument protects and preserves the Devils Postpile formation, the 101-foot Rainbow Falls, and the pristine mountain scenery. The Devils Postpile formation is a rare sight in the geologic world and ranks as one of the world's finest examples of columnar basalt. Its columns tower 60-feet high and display an unusual symmetry. Another wonder is in store just downstream from the Postpile at Rainbow Falls, once called 'a gem unique and worthy of its name'. When the sun is overhead, a bright rainbow highlights the spectacular Falls.

Fewer than 100,000 years ago, basalt lava erupted two miles upstream from today's postpile. The lava flowed into the valley and pooled to a depth of 400 feet. The mass of molten lava then began to cool uniformly from top to bottom. As it cooled and contracted, stresses built up in the basalt rock causing it to fracture. Each crack branched when it reached a length of about 10 inches, joining other cracks to form a pattern on the surface of the flow. Under ideal conditions, surface cracks deepened to create the vertical, hexagonal columns you see today. Some 10,000 years ago a glacier flowed down the Middle Fork of the San Joaquin River and overrode the Postpile formation. The moving ice quarried away one side of the postpile, exposing a sheer wall of columns 60 feet high. Evidence of the glacier - the polishing and scratches of glacial ice - remains atop the postpile.

The monument is also a portal to the High Sierra backcountry, with some 75% included in the Ansel Adams Wilderness. At 800 acres, Devils Postpile National Monument may be considered small by some, yet its natural and recreational values abound.