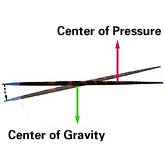 The discus and javelin first appeared in ancient game competitions in 708 B.C. Javelin events included both target throwing and distance throwing using a sling. By 1780, the javelin was adopted as an event by the Scandinavians, and the current one-handed throwing style while running was adopted at this time. In 1953, a hollow javelin was developed in the United States by Franklin 'Bud' Held who also set a new world record. Since the javelin had a standard weight, the surface area was increased which augmented the javelin's flight capability and caused it to land horizontally. In 1966, the javelin was thrown over 100 meters (328 feet) by an athlete using a discus style turn before the throw. This throwing style was judged unsafe and thereafter banned by the International Amateur Athletic Federation (IAAF). The 100-meter mark was broken again in 1984. Subsequently, the IAAF adopted new rules to ensure shorter flight times and sport safety.

During flight, the javelin also spins about its longitudinal axis. At a rate as high as 25 revolutions per second, the spin stabilizes the javelin in flight. The javelin also experiences oscillation down its length during flight. Oscillation is detrimental to the flight and needs to be minimized by the thrower or by the materials used in the javelin. Modern javelins are made from steel, aluminum or aluminum alloy. Novice throwers use a less stiff javelin (which is more forgiving in training). As skill is developed, a stiffer javelin is used (straighter flight). The steel javelins are the stiffest and have less vibration than the aluminum models, while aluminum offers flexibility and may be easier to throw.