Somewhere Over Which Rainbow? 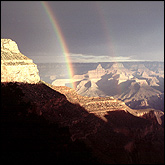 How many rainbows are there really when we only see one during a rainstorm? The answer isn't as simple as you might think! Rainbows are formed when light enters a water droplet, reflects once inside the droplet, and is reflected back to our eyes. Each raindrop reflects and refracts the light that enters it in all possible ways. When light first hits the drop, a fraction of that light is reflected and the rest is transmitted through until it hits the backside of the drop on the inside. Again, some of that light is refracted and some is reflected. At each encounter with the surface inside the drop, some of the light is reflected and remains inside the drop, and the rest escapes. Therefore, light rays can escape after one, two, three or more internal reflections.

When you see two rainbows, the first or primary bow at 42 degrees, is brighter with red on the outside ending with violet on the inside. The secondary bow at 51 degrees is always fainter with the colors reversed due to the second reflection; violet on the outside ending with red on the inside. Isaac Newton derived a mathematical equation for the angular size of rainbows after a number (N) of reflections inside the droplet. He never solved the problem for N=3, since he decided that in the third pass there wouldn't be enough light for a person to actually see it. Edmund Halley, after whom Halley's comet was named, carried the calculations through and discovered that the tertiary rainbow would actually appear with an arc of 40 degrees and 20 seconds, and surprise! It should appear not opposite the sun but around the sun itself! For two thousand years, men had been looking for this arc in the wrong part of the sky!