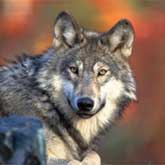 Historically, most Native Americans revered gray wolves, trying to emulate their cunning and hunting abilities. However, wolves became nearly extinct in the lower 48 states in the early part of the 20th century because settlers believed wolves caused widespread livestock losses. Constantly persecuted and targeted by large scale predator eradication programs sponsored by the federal government, wolves have been pursued with more passion and determination than any other animal in U.S. history. By the time wolves were finally protected by the Endangered Species Act of 1973, they had been exterminated from the lower 48 states, except for a few hundred that inhabited extreme northeastern Minnesota.

Second only to humans in their adaption to climate extremes throughout the world, gray wolves were equally at home in the deserts of Israel, the deciduous forests of Virginia and the frozen Arctic of Siberia. Within the continental United States, gray wolves once ranged from coast to coast and from Canada to Mexico.

For the past twenty years, Yellowstone National Park has been at the center of debates over the wolf. By about 1930, wolves had been deliberately extirpated from the western United States, including Yellowstone. After years of comprehensive study and planning, the U.S. Fish andWildlife Service reintroduced gray wolves into Yellowstone and U.S. Forest Service lands in central Idaho. In 1995 and 1996, 31 wolves from Canada were temporarily held in pens before being released in Yellowstone National Park. At the same time 35 wolves were released on remote Forest Service lands in Idaho. All of the reintroduced wolves were fitted with radio collars and monitored by biologists from the Fish andWildlife Service and other cooperating agencies. The reintroduction has been very successful and by December 1997 about 80 wolves lived in each area.