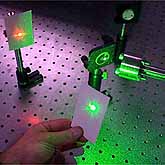 Light is a fascinating thing. Or things, as the case may be. Electromagnetic energy that our eyes have developed to see, light has the same behavior and properties as all other electromagnetic radiation. But there is a dilemma that is most noticeable with light, arising from the fact that it is observed to behave at times as though it is composed of small, discrete particles, while at other times it behaves as though composed of continuous waves. This is known as the 'wave-particle duality' of light. In everyday applications this duality is unimportant, and for the most part we don't care whether we are bathed in waves or particles as long as the lights come on when we flick the switch or the sun shines when the storm clouds break apart.

But the wave-particle duality has great importance in more technical and scientific applications. In certain materials. electrons can be stimulated to switch energy levels within atoms and molecules. When those electrons go back into their original energy levels, they each give up a single 'particle' of energy called a 'photon', whose value is exactly equal to the difference in energy between the two electronic levels. When the material is made to lase in this way, the released photons are manipulated in such a way that they come out of the material as coherent waves of light. That is, the light waves all have the same wavelength, all have the same amplitude, and all the waves are in phase and traveling in parallel with each other.

Light from a non-coherent source radiates outward from that source in all directions. By contrast, a beam of laser light doesn't diverge but maintains a constant size. At least, that's the theory. In practice, laser beams do diverge in a manner that directly reflects the quality with which the laser device has been constructed. The better the laser device, the narrower, more coherent, and less divergent is the beam of laser light that it emits.