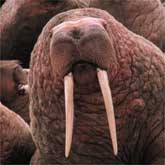 The walrus is a member of the pinniped family, which also includes sea lions and seals. Walrus differ from some seals in that they can turn their hind limbs forward. This characteristic enables them to raise themselves up, giving them greater freedom of movement on land. Two subspecies, the Atlantic and Pacific walrus, live in the arctic and subarctic regions of the Northern Hemisphere. The Pacific walrus is the largest. The walrus is covered by a thick layer of fat and a tough leathery skin with a thin layer of hair which is light brown on adults and almost black on young walrus. The walrus' head is small in comparison with its heavy, clumsy body, and the upper lip is thick and fleshy with a stiff moustache made up of bristles which are important sensory organs. Although there are other teeth in the upper jaw, it is the greatly enlarged canine teeth, called tusks, that give the walrus its distinctive appearance.

Walrus primarily eat species that dwell on the sea bottom, such as mollusks; salt worms; crabs, shrimp, and other crustaceans; and octopus. The walrus drags its tusks like sled runners along the sea bottom, rooting out buried prey with its snout and stiff facial bristles. Occasionally walrus may consume other pinnipeds such as spotted, ringed, and bearded seals. Tusks also serve as an indicator of social rank and may be used as protection. Sometimes, when a walrus wants to rest while still in the water, it will hook its tusks over the edge of an ice floe. Tusks may also be used to break up an ice floe to keep breathing holes open or to retrieve calves that have become stuck in the ice.

Walrus spend most of their lives at sea, although they frequently come out of the water, or haul out, onto ice floes or land to rest. They also leave the water to give birth to their young and to shed their hair. Keeping mainly to the moving ice packs, walrus migrate north in spring and south in winter. For thousands of years, the walrus was regarded by Eskimos and other Native people of the North as having supernatural powers and human attributes. It was also a natural resource of major importance to their culture. They obtained food and fuel from the walrus, as well as raw materials for making tools, shelter, boats, sleds, and clothing. The walrus was hunted for centuries by Russians, Americans, and others for its valuable ivory tusks and oil. In the United States, the walrus became a federally protected species with the passage of the 1972 Marine Mammal Protection Act.