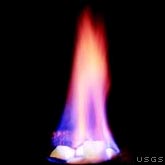 What looks like regular water ice but hisses and jumps around like water on a hot plate when you put it on a room-temperature surface and bursts into flame when you light it up? It is a rare and fascinating form of methane gas called methane hydrate.

Methane gas is primarily produced by bacteria while decomposing plant and animal matter and is the principle component of natural gas. It is a colorless, odorless and flammable gas that is less dense than air. Methane hydrate is a whole new form of matter where ordinary methane gas molecules are captured within a cage of water ice molecules. Methane hydrate is produced wherever methane, water, high-pressure and low temperature coexist. It was first noticed in 1930 in gas pipelines and in 1964 naturally occurring in one of the Siberian gas drills. Since then one of the most common places one can find methane hydrate is on the sea floor, deep below 400 meters in cold waters. Organic matter gets slowly deposited on the bottom of the oceans where it decomposes producing methane gas which gets trapped within water ice crystals formed by high-pressure and low temperature.

In addition to its fascinating properties, this ice that burns may hold two important keys to our future. First, some preliminary research indicates huge deposits of methane hydrate on the ocean floors making it an important energy source for our future. Second, melting of these deposits due to global warming of our oceans may release significant quantities of methane gas into the atmosphere, which in turn would further contribute to global warming thus starting a vicious circle. On May 2, 2000, the President of the United States enacted the Methane Hydrate Research and Development Act of 2000. Many US and foreign agencies are intensively working on the methane hydrate problem today hoping to efficiently use this natural source of energy and avert global warming catastrophe.