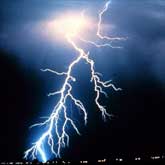 What's hotter than the surface of the sun, moves with incredible speed, lasts a few seconds and goes out with a bang? If you said lightning, you're right. Lightning strikes cause thousands of forest fires every year and occasionally cause the death of people. Few who have been hit by lightning live to tell the tale. Yet the process that causes lightning is not really any different than what makes static electricity jump when we walk on a carpet and touch a metal doorknob.

A common misconception is that lightning moves from the sky to the ground. Actually, the process is much more interesting. In the seconds before a lightning strike, negatively-charged air rapidly moves towards the ground. In reaction, positively-charged particles in tall objects on the ground (church steeples, trees, electrical towers) begin to flow upward toward the descending air. When the two connect, a giant rush of visible electrical energy leaps from the ground. This is what we see as lightning. And the thunderclap we hear soon after is the shockwave caused by the sudden heating of the air near the lightning bolt.