Who Moved My Moldy Cheese? 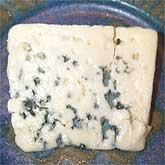 There are few things less appetizing than a fuzzy, moldy piece of cheese. However, one of the most popular cheeses, Blue Cheese and its varieties, the French Roquefort, the English Stilton and the Italian Gorgonzola, derives its taste, flavor and blue color from the Penicillium mold. This cheese traces it origin to the early part of the first century when sheep or cow’s milk was allowed to ripen in limestone caves. The caves were a perfect breeding ground for Penicillium mold which easily took up residence in the cheese.

Molds belong to the same family as mushrooms and yeast. Because they share some common characteristics with plants they were once considered to be part of the plant family. But the most important thing that plants do, molds cannot do - make their own food through the process of photosynthesis. Instead, they produce special enzymes that break down organic material and absorb it. In the case of blue cheese, they are literally eating away the cheese. What we enjoy in a blue cheese is the result of the Penicillium mold doing its work. Molds reproduce through spores that float in the air. It was these early floating spores that found that cheese and the rest is culinary history. But don't expect that moldy cheese in your refrigerator to taste as elegant as a bit of Roquefort spread on your French baguette, most molds taste, well, rather moldy.