by USDA Department of Agriculture 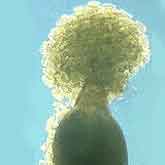 Nematodes are simple worms consisting of an elongate stomach and reproduction system inside a resistant outer cuticle (outer skin). Most nematodes are so small, between 400 micrometers to 5 mm long, that a microscope is needed to see them. Their small size, resistant cuticle, and ability to adapt to severe and changing environments have made nematodes one of the most abundant types of animals on earth. The cuticle is the flexible coating around the nematode [its skin], which protects the nematode from physical and chemical dangers. The most noticeable feature of the cuticle is the system of grooves across the body from head to tail. As nematodes grow they usually shed their cuticle four times.

Most nematodes feed on bacteria, fungi, and other soil organisms. Others are parasitic, obtaining their food from animals (such as the dog heartworm), humans (such as the pinworm), and plants. Agricultural cultivation encourages an increase in parasitic nematodes that feed on the crops being grown. Occasionally, new kinds of plant parasitic nematodes may be introduced into a field by contaminated plant parts, soil on farm equipment and irrigation water. Nematodes which parasitize plants may cause yield losses by themselves or they may join with other soilborne organisms such as viruses, fungi, and bacteria, to promote disease development in plants. Most often, nematode feeding reduces the flow of water and nutrients into the plant, increasing the plant's susceptibility to other stress factors such as heat, water, and nutritional deficiencies.

After hatching, plant-parasitic nematodes move through the soil to find areas on plant roots to feed. Some nematodes stay outside the root and use long stylets to puncture cells inside the root (ring, stubby root, and sting nematodes). Nematodes which enter the root may move throughout the root (lesion nematode) and feed at many sites (causing root lesions), or stay in one feeding site (cyst and root-knot nematodes). Nematodes which stay at one feeding site swell from eel-shaped to pear-shaped and stay at the same site until they die.