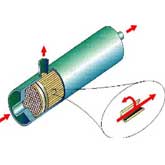 When we're flying high above the Earth, few of us give much thought to aircraft safety. We're usually too busy wondering when lunch is going to be served. But flying safely is a goal of NASA's Glenn Research Center (GRC) in Cleveland, Ohio. They're working on the problems that could arise if fuel in the tanks were to accidentally ignite in flight or during an emergency landing. A team of Glenn's scientists, headed by Dr. Clarence Chang, is trying to find better ways to make the stored fuel less flammable. 'We know that in order to initiate combustion, three ingredients are needed: oxygen, fuel vapor and an ignition source,' Chang said. 'We can't remove the fuel from the tank, and we've already removed just about all of the known ignition sources. Since we can't remove the ignition sources we don't know about, decreasing the oxygen level is currently the easiest way to avoid fuel tank explosion.'

According to Chang, the U.S. military already uses inerting systems (a method of reducing the fire potential of fuel) to protect aircraft. But these systems are heavy, take up a lot of space and are very expensive to buy and operate. The science team has been working on technologies for air separation modules that are smaller, more affordable and more efficient then the type currently being proposed for use in commercial aircraft fuel tanks today. No current commercial aircraft as yet uses inerting technology. Ignition experiments are being performed to look at the amount of oxygen removal that would be needed to protect a fuel tank from accidents. In addition, changes in the fuel itself can work in concert with inerting to make the fuel harder to ignite and decrease the need for inerting devices. The trick is to have a fuel that is safe in storage, but burns great in the engine.

Also, scientists are developing sensors that monitor the gasses inside the tank. But at this time the hostile environment inside the tank is a formidable challenge to overcome. These advanced technologies in inerting, gas detection and fuel reformulation will make future aircraft safer from fuel-fed fire. Whew! One less thing for white-knuckled flyers to worry about..........When does the movie start?