Origins Of The Meter 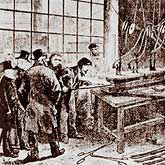 The origins of the meter go back to at least the 18th century. At that time, there were two competing approaches to the definition of a standard unit of length. Some suggested defining the meter as the length of a pendulum having a half-period of one second; others suggested defining the meter as one ten-millionth of the length of the earth's meridian along a quadrant (one fourth the circumference of the earth). In 1791, soon after the French Revolution, the French Academy of Sciences chose the meridian definition over the pendulum definition because the force of gravity varies slightly over the surface of the earth, affecting the period of the pendulum.

Thus, the meter was intended to equal 10-7 or one ten-millionth of the length of the meridian through Paris from pole to the equator. However, the first prototype was short by 0.2 millimeters because researchers miscalculated the flattening of the earth due to its rotation. Still this length became the standard. In 1889, a new international prototype was made of an alloy of platinum with 10 percent iridium, to within 0.0001, that was to be measured at the melting point of ice. In 1927, the meter was more precisely defined as the distance, at 0, between the axes of the two central lines marked on the bar of platinum-iridium kept at the BIPM, and declared Prototype of the meter by the 1st CGPM, this bar being subject to standard atmospheric pressure and supported on two cylinders of at least one centimeter diameter, symmetrically placed in the same horizontal plane at a distance of 571 mm from each other.

The 1889 definition of the meter, based upon the artifact international prototype of platinum-iridium, was replaced by the CGPM in 1960 using a definition based upon a wavelength of krypton-86 radiation. This definition was adopted in order to reduce the uncertainty with which the meter may be realized. In turn, to further reduce the uncertainty, in 1983 the CGPM replaced this latter definition by the following definition: the meter is the length of the path travelled by light in vacuum during a time interval of 1/299 792 458 of a second. Note that the effect of this definition is to fix the speed of light in vacuum at exactly 299 792 458 ms-1. The original international prototype of the meter, which was sanctioned by the 1st CGPM in 1889, is still kept at the BIPM under the conditions specified in 1889.