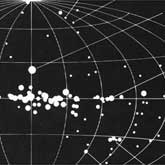 Right Ascension (abbreviated R.A.) and Declination (abbreviated Dec) are a system of coordinates used by astronomers to keep track of where stars and galaxies are in the sky. They are similar to the system of 'longitude' and 'latitude' used on the Earth. Declination is measured in degrees, and refers to how far above the imaginary 'celestial equator' an object is (like latitude on the Earth). Try standing in the middle of a room, and holding your arm out straight in front of you. If you move your arm up to point at a light, or the ceiling, it is just like going 'up' in Declination. If you move your arm down to point at some objects on the floor, you're moving 'down' in Declination.

Right Ascension is measured in hours of time. This is convenient for astronomers because, as the Earth rotates, stars appear to rise and set just like the Sun. If you go out into your backyard in the winter, and lie on your back some night, you might be able to see the constellation of Orion overhead. Orion has a Right Ascension of 5 hours. Out of the corner of your eye, you might also see the constellation Cancer, which is at a Right Ascension of 8 hours. This means that if you wait 3 hours (subtract 5 hours from 8 hours), Cancer will be directly overhead. Just as latitude and longitude uniquely identify the positions of cities on the Earth, Right Ascension and Declination uniquely identify the position of stars and galaxies in the sky.