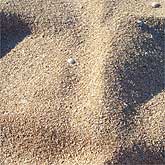 Give a plastic bucket and a shovel to a child, then turn her loose on a beach full of sand. She'll happily toil the day away building the sandcastle to end all sandcastles. It's pure fun. It's also serious physics. Sandcastles are built from grains - billions of tiny sharp-edged particles that rub and tumble together. The strength of a sandcastle depends on how the grains interact. What happens when they're wet? How do they respond to a jolt? It's not only beachgoers who are interested; farmers, physicists and engineers want to know, too.

Scientists mostly understand why sand on a beach behaves as it does. Damp sand sticks together because water forms little grain-to-grain bridges. Surface tension - the same force that lets some insects walk on the surface of a pond - acts like rubberbands between the grains. Adding water to damp sand fills spaces between the grains. The bridges vanish and the sand begins to flow more easily.

It's something to ponder the next time you're building a sandcastle: inside the moat lies some far-reaching physics.