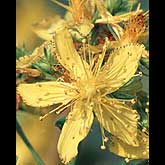 St. John's wort (Hypericum perforatum in Latin) is a long-living plant with yellow flowers. It contains many chemical compounds. Some are believed to be the active ingredients that produce the herb's effects, including the compounds hypericin and hyperforin. How these compounds actually work in the body is not yet known, but several theories have been suggested. Preliminary studies suggest that St. John's wort might work by preventing nerve cells in the brain from reabsorbing the chemical messenger serotonin, or by reducing levels of a protein involved in the body's immune system functioning.

St. John's wort has been used for centuries to treat mental disorders as well as nerve pain. In ancient times, doctors and herbalists (specialists in herbs) wrote about its use as a sedative and treatment for malaria as well as a balm for wounds, burns, and insect bites. Today, St. John's wort is used by some people to treat mild to moderate depression, anxiety, or sleep disorders. Herbal products such as St. John's wort are classified as dietary supplements by the U.S. Food and Drug Administration (FDA), a regulatory agency of the Federal Government. The FDA's requirements for testing and obtaining approval to sell dietary supplements are less strict than its requirements for drugs. Unlike drugs, herbal products can be sold without requiring studies on dosage, safety, or effectiveness.