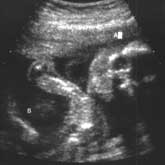 In medical testing, ultrasound equipment is used to produce a sonogram, or a picture of organs inside the body. Ultrasound scanners do not use X-rays. They use waves of such high frequency that they cannot be heard. (Frequency is the number of sound wave cycles per second. The highest frequency humans can hear is 20 thousand Hertz. The sound waves used for ultrasound exams have a frequency of one to seven million Hertz.) The amount of energy they contain is low. The sound waves are made in a device called a transducer. It contains one or more quartz crystals that vibrate in response to an electrical current. This vibration changes electrical energy into the mechanical energy of sound.

When sound waves from the transducer enter the body, they travel through different materials at different speeds. When they hit a boundary between one kind of tissue and another--such as bone and muscle, or fluid and membrane--some bounce back, like an echo. The transducer receives those that bounce back, and the crystals work in reverse. They convert the mechanical energy of sound into an electrical current. A computer translates the electrical signals into a picture on a monitor. The picture is called a sonogram.

Ultrasound exams can yield several different kinds of information. Still pictures show individual structures inside the body. The pictures can be saved, enlarged, or printed just like any other photograph. Or, they can be viewed in rapid sequence, showing movement. Another type of sonogram is the Doppler. It works because sound waves bounce back to the transducer at a slightly different frequency than they had when they left it. The frequency shift can be used to produce colored images of problems such as clots in blood vessels or weaknesses in artery walls. Doppler techniques provide data on heart rate and blood flow.