Why Do We Call It A 'Vaccination?' 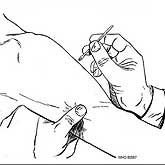 Smallpox 'vaccinations' are in the news nowadays. What is smallpox and what is a vaccination? Smallpox is one of the oldest and most horrible diseases afflicting the human family. In the past, it killed twenty to sixty percent of victims, and left the survivors with disfiguring scars from the rash.

Early on people realized that survivors of smallpox were immune to further attacks. Over a hundred years before our present form of vaccination, a practice called 'variolation' was used, beginning in China and Asia and reaching Europe by the beginning of the 18th century. Variolation consisted of applying the pus or ground scabs from a patient who had a mild case of smallpox (also called variola, hence the name) to a scratch in the skin. This system wasn't very good: two or three percent of variolated people died of smallpox. But it was better than the 20-60 percent who might die in an epidemic. By the 18th century, people had noticed that those who had had a milder disease called cowpox were also immune from smallpox. Milkmaids often caught it from their cows.

So in the late 18th century, Edward Jenner invented the practice we now know as vaccination, so called from 'vaca', the latin word for 'cow'. Patients were innoculated with material from cowpox lesions, which is much safer than variolation because cowpox is a milder illness. Today, most adults over the age of 35 have a small round scar on their upper arm where they were vaccinated as children.