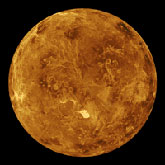 At first glance, if Earth had a twin, it would be Venus. The two planets are similar in size, mass, composition, and distance from the Sun. But there the similarities end. Venus has no ocean. Venus is covered by thick, rapidly spinning clouds that trap surface heat, creating a scorched greenhouse-like world with temperatures hot enough to melt lead and pressure so intense that standing on Venus would feel like the pressure felt 900 meters deep in Earth's oceans. These clouds reflect sunlight in addition to trapping heat. Because Venus reflects so much sunlight, it is usually the brightest planet in the sky.

The atmosphere consists mainly of carbon dioxide (the same gas that produces fizzy sodas), droplets of sulfuric acid, and virtually no water vapor - not a great place for people or plants! In addition, the thick atmosphere allows the Sun's heat in but does not allow it to escape, resulting in surface temperatures over 450 C, hotter than the surface of the planet Mercury, which is closest to the Sun. The high density of the atmosphere results in a surface pressure 90 times that of Earth, which is why probes that have landed on Venus have only survived several hours before being crushed by the incredible pressure. In the upper layers, the clouds move faster than hurricane- force winds on Earth.

Venus sluggishly rotates on its axis once every 243 Earth days, while it orbits the Sun every 225 days - its day is longer than its year! Besides that, Venus rotates retrograde, or 'backwards,' spinning in the opposite direction of its orbit around the Sun. From its surface, the Sun would seem to rise in the west and set in the east. Earth and Venus are similar in density and chemical compositions, and both have relatively young surfaces, with Venus appearing to have been completely resurfaced 300 to 500 million years ago.