by NASA Office of Space Science 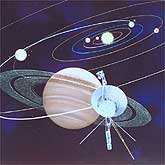 After historic visits to Jupiter and Saturn, Voyager 1 is now on course to be the first human-made object to leave our solar system. In space for more than 25 years, it has already traveled farther than any other spacecraft. It is not clear when Voyager 1 will reach the heliopause boundary, where the influence of our Sun ends. The boundary is thought to exist somewhere from 8 to 22.5 billion kilometers (5 to 14 billion miles) from the Sun. When Voyager 1 does cross over, scientists will be able to measure the interstellar environment without the influence of the Sun for the first time.

Voyager 1 is speeding along at about 57,600 kph (35,790 mph) - fast enough to travel from the Earth to the Sun three and a half times in one year. As of March 2002, Voyager 1 was at a distance of 12.4 billion kilometers (84 Astronomical Units) from the Sun. But it could still take more than 20 years to escape our solar system. Its sister spacecraft, Voyager 2, will be the next object out of our solar system. Pioneer 10 and Pioneer 11 also are on courses that will eventually take them into interstellar space.

All four spacecraft are carrying messages from humanity. Both Voyagers carry a gold record 'greeting to the universe' containing sounds and images selected to portray the diversity of life and culture on Earth.