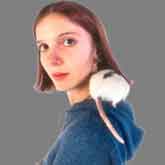 You've probably heard reports about a recently-developed technological device that may help quadriplegics regain control of their limbs. The device is designed to read the quadriplegic's brain waves, and then transfer those signals to electrodes that stimulate the hand muscles. Other recent developments may yield hi-tech ways to treat other brain-based ailments such as the memory loss accompanying dementia. In early 2003, a University of Southern California biomedical engineering research team created a silicon chip copy of a rat's hippocampus, a brain structure used for creating and storing new memories. The artificial hippocampus has been hailed as the world's first brain prosthesis, the first step in the development of all sorts of artificial devices that could be implanted into a human brain to replace damaged neural assemblies.

In a way, all of this seems miraculous, but it's also a reminder that the brain's means of communication are run-of-the-mill electrical and chemical energy -- the same forms of energy used in a battery-powered electrical circuit. We usually think of 'mind' and 'matter' as two different things, but any act of thinking relies on the transmission of an electrical impulse along a physical neural pathway. Mind-reading technology that now seems like science fiction may be routine in the near future. Some of that technology, though, may not be such a boon to society. Using the mind to manipulate matter is one thing, but what about using matter to manipulate the mind?

In 2002, there was a report in the journal Nature about remote-controlled rats. The authors of the report implanted electrical probes in the rats' brains that picked up signals from a remote control device. By stimulating electrodes connected to a pleasure center in the rat's brain, they were able to make the rat do all sorts of things it would normally avoid by instinct. This is essentially the same technology as the neural prosthesis, except that the signal goes from an outside mechanical device to the brain rather than the other way around. Other recent research into the function of the hippocampus has yielded technology for 'reading' a sleeping rat's dreams as it replays a mental maze-running tape in a process of consolidating knowledge acquired the previous day. This sounds like great material for a science fiction novel, but not anything we would want in our real lives.