What Is The Periodic Table? 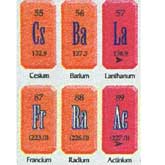 The periodic table of the elements is a representation of all known elements in an orderly array. The periodic law presented by Dmitri Mendeleev in 1869 stated that if the (known) elements are arranged by atomic weight, then certain trends in chemical properties can be observed. That is to say, when the elements are arranged by atomic weight, then elements whose chemical behavior is similar are seen to line up with each other with some regularity. The number of known chemical elements was considerably smaller in Mendeleev's time. Nor was there an accurate or reliable model of atoms that could describe observed chemical behaviors. The so-called 'noble gases' (helium, neon, xenon, etc.) and many other elements were unknown. As more elements were identified, however, Mendeleev's crude periodic table was expanded and refined.

The development of modern atomic orbital theory made it possible to identify and relate chemical behavior based on electronic structures. This in turn made it possible to refine the periodic table to the point that elements that were unknown at the time could be predicted. The final proofs came with the eventual discoveries of those missing elements predicted by periodic theory, some of which are quite rare in nature. Inconsistencies with arrangement according to atomic weight and observed chemical behaviors of some elements still limited the value of the periodic table. Eventually arrangement of the periodic table was restructured by H.G. Mosely, using an approach based on the electronic structures of the atoms.

In his version, Mosely arranged the elements according to their commonly observed oxidation states. This produced a periodic table that was in excellent agreement with the observed chemical behaviors of the elements, although it now showed a small number of elements to be out of order by atomic weight. The version of the periodic table of the elements developed by Mosely is the version in use today. The elements are displayed in ascending order of atomic number in a horizontal and vertical array. Each element is presented with its atomic symbol, atomic number, atomic weight, the oxidation states known for that element, and the electronic configuration of its atom. The elements in rows make up 'periods' that reflect the outermost electronic shell being used. The elements in columns make up 'groups' that exhibit the same kinds of electronic and chemical behavior. Group behavior varies in a manner such that two sets of groups are assigned across the periods.