What's So Bad About The Badlands? 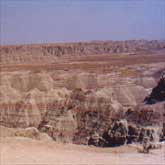 Hundreds of square miles of South Dakota are known as 'Badlands', a dry terrain of colorful rock formations and little vegetation. For pioneers crossing them in the 19th century, these lands were indeed 'bad', as there was little food or water. But for tourists in the 21st century, the Badlands are a unique and wonderful treat. The rock of the Badlands is made up of many layers, all lying flat (in contrast to the layers in mountainous areas, which are folded and tilted). The different colors of rock - yellow, white, red, black - reflect different conditions that prevailed over millions of years as the layers collected, one upon the other.

75 million years ago, what is now South Dakota lay under a shallow inland sea. Mud, sand, and the shells of ancient creatures collected at the bottom. In time these sediments hardened into rock, now called the Pierre Shale. This lowest layer of Badlands rock contains many marine fossils. Later the land rose as the Rocky Mountains started forming to the west. The sea receded, and South Dakota was home to a jungle teeming with large and small mammals.. As the climate became cooler and drier, the forests were replaced by grasslands, also home to numerous animals. These layers are a treasure trove of ancient mammal fossils. There are also layers of ash from volcanoes to the west, and layers of sandstone marking the courses of ancient rivers.

In the last 500,000 years, the Badlands area has had a dry climate with occasional very heavy rains, which have rapidly carved away the loose, rather soft rock, exposing the many colorful layers - and also the many fossils. The sediment is carried off too quickly for soil to collect, so there is little vegetation, only the towering cliffs and deep canyons.