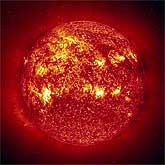 Our Sun may seem an enduring, unwavering beacon in the sky, but in truth it has a 'heartbeat' of sorts--a pulsation between dimmer and brighter phases so slow that it only 'beats' 9 times each century! It's understandable that you might not have noticed. The pulsing is not only slow, it's also subtle. The total energy coming from the Sun only varies by about 0.1% over each 11-year cycle. For a long time scientists didn't notice it either, which is why the Sun's intensity is called, ironically, the 'solar constant.'

These small changes can affect Earth in a big way. For example, between 1645 and 1715 (a period astronomers call the 'Maunder Minimum') the sunspot cycle stopped; the face of the Sun was nearly blank for 70 years. At the same time Europe was hit by an extraordinary cold spell: the Thames River in London froze, glaciers advanced in the Alps, and northern sea ice increased. An earlier centuries-long surge in solar activity (inferred from studies of tree rings) had the opposite effect: Vikings were able to settle the thawed-out coast of Greenland in the 980s, and even grow enough wheat there to export the surplus to Scandinavia.