You Can Learn A Lot From A Microbe. 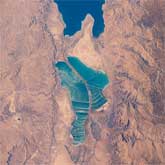 You can learn a lot from a microbe. Right now, a tiny critter from the Dead Sea is teaching scientists new things about biotechnology, cancer, possible life on other worlds. And that's just for starters: This microbe, called Halobacterium, may hold the key to protecting astronauts from one of the greatest threats they would face during a mission to Mars: space radiation. The harsh radiation of interplanetary space can penetrate astronauts' bodies, damaging the DNA in their cells, which can cause cancer and other illnesses. DNA damage is also behind cancers that people suffer here on Earth. Halobacterium appears to be a master of the complex art of DNA repair. This mastery is what scientists want to learn from.

In recent years, a series of experiments by NASA-funded researchers at the University of Maryland has probed the limits of Halobacterium's powers of self-repair, using cutting-edge genetic techniques to see exactly what molecular tricks the 'master' uses to keep its DNA intact. Being a virtuoso at repairing damaged DNA makes Halobacterium one hardy little microbe: in experiments by the Maryland research group, Halobacterium has survived normally-lethal doses of ultraviolet radiation (UV), extreme dryness, and even the vacuum of space.

Learning how all these repair mechanisms work could teach scientists a lot about how DNA repair occurs in humans, and perhaps point to ways to enhance people's natural ability to cope with damage to their DNA--a possible boon to astronauts. Not bad for a humble microbe.