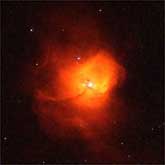 How Far Are The Seven Sisters?

The Pleiades cluster, named by the ancient Greeks, is easily seen as a small grouping of stars lying near the shoulder of Taurus, the Bull, in the winter sky. Although it might be expected that the ... Continue reading 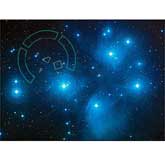 Long before our Sun and Earth ever existed, a Jupiter-sized planet formed around a sun-like star. Now, 13 billion years later, NASA's Hubble Space Telescope has precisely measured the mass of this ... Continue reading