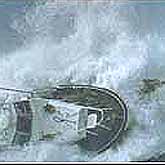 A tsunami (pronounced 'soo-nah-mee') is a series of waves of extremely long wave length and long period generated in a body of water by an impulsive disturbance that vertically displaces the water. The term tsunami was adopted for general use in 1963 by an international scientific conference. Tsunami is a Japanese word represented by two characters: 'tsu' and 'nami.' The character 'tsu' means harbor, and the character 'nami' means wave. In the past, tsunamis were often referred to as 'tidal waves.' The term 'tidal wave' is a misnomer. Tides are the result of gravitational influences of the moon, sun, and planets. Tsunamis are not caused by the tides and are unrelated to the tides; although a tsunami striking a coastal area is influenced by the tide level at the time of impact.

There are many causes of tsunamis but the most prevalent is earthquakes. In addition, landslides, volcanic eruptions, explosions, and even the impact of cosmic bodies, such as meteorites, can generate tsunamis. Tsunamis can be generated when the sea floor abruptly shifts and vertically displaces the overlying water from its equilibrium position. Waves are formed as the displaced water mass attempts to regain its equilibrium. The main factor which determines the initial size of a tsunami is the amount of vertical sea floor deformation. Not all earthquakes generate tsunamis. To generate tsunamis, earthquakes must occur underneath or near the ocean, be large and create movements in the sea floor. All oceanic regions of the world can experience tsunamis, but in the Pacific Ocean there is a much more frequent occurrence of large, destructive tsunamis because of the many large earthquakes along the margins of the Pacific Ocean.

Any disturbance that displaces a large water mass from its equilibrium position can generate a tsunami. Generally tsunamis caused by landslides or volcanic eruptions dissipate more quickly than Pacific-wide tsunamis caused by some earthquakes and rarely affect coastlines distant from the source. Tsunami waves are shallow-water waves with long periods and wave lengths. Shallow water waves are different from wind-generated waves (the waves many of us have observed on the beach). Tsunamis can savagely attack coastlines, causing devastating property damage and loss of life. Since science cannot predict when earthquakes will occur, they cannot determine exactly when a tsunami will be generated. But with the aid of historical records of tsunamis and numerical models, scientists can get an idea where tsunamis are most likely to be generated.