A Humongous Fungus Among Us 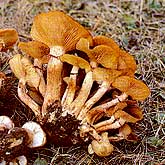 Did you ever wonder what the world's largest organism is? If we had to guess, maybe we'd pick an elephant, a giant sequoia or a whale. Well, those choices would be wrong; this organism is actually a fungus! It was decided in 1992 that Armillaria bulbosa, a soil fungus, was the world's largest organism. It was found in a northern Michigan hardwood forest. Scientists also calculate that it is most likely one of the world's oldest organisms as well, exceeding 1,500 years and weighing in at over 100 tons.

Armillaria bulbosa is actually a plant pathogen. The fungus' hyphae pierce the roots of aspen trees and absorb nutrients from them. Therefore, the majority of the fungus is underground and only tiny mushrooms can be seen in the fall. The mushroom caps from the offshoots are edible and it is sometimes called the 'honey mushroom'.

Fungi are extremely important in our world. They decay organic matter, such as a fallen tree in a forest. Without fungi, we would be left with ever existent fallen trees. We eat them and use them medically, such as for penicillin. What would mushroom lovers do without the tasty treats on their pizza? The next time you see a mushroom, think about Armillaria bulbosa and how much of the mushroom may be underground. It could be much larger, heavier and older than you ever imagined!