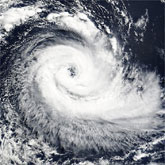 Hurricanes are terrifying. They rip trees right out of the ground, hurl cars into the air, and flatten houses. Their winds can blow faster than 100 mph. Some hurricanes have been known to pull a wall of water from the ocean 20 feet high ... then fling it inland, inundating miles of coast. No other storms on Earth are so destructive. Or so memorable. The most powerful hurricanes are talked about for decades, long after the floods subside and trees grow back. What child in Mississippi today hasn't heard of Hurricane Camille, the monster storm that traumatized their parents in 1969? Hurricanes are the only storms we actually name, like people, to help us remember. Naming hurricanes also helps prevent confusion. Sometimes there are two or more of the storms raging at the same time. Weather forecasters and storm trackers use names like Camille, Hugo and David to clarify which storm they're talking about. For these reasons, every hurricane gets a name. Always.

That is, until ... March 28th, when a nameless hurricane crashed into Brazil. The storm made landfall near Torres, a small town in the state of Santa Catarina about 500 miles south of Rio de Janeiro. Weather satellites have been circling Earth for more than 40 years. During that time ... they've spotted hurricanes in the northern Atlantic Ocean, and on both sides of the equator in the Pacific and Indian Oceans, but never before in the south Atlantic. There are exceptions. In 1991, for instance, the US National Hurricane Center documented a tropical storm off the coast of Congo. It lasted about five days as it drifted toward the central south Atlantic, but it never reached hurricane strength. What was different about the March 2004 storm? Why did it become a hurricane? No one knows.

When the storm crashed into Brazil, local observers weren't even sure it was a hurricane. Brazil has no ground-based network of weather stations to measure wind and rain from tropical storms. Space satellites, however, gathered a great deal of data. 'NOAA polar orbiting satellites measured the temperature of the storm's eye,' says climate scientist Roy Spencer of the University of Alabama, Huntsville. In addition, NOAA's GOES satellites and NASA's Terra and Aqua satellites took pictures of the storm at microwave, infrared, and visible wavelengths, allowing scientists to monitor the motions of moisture and heat energy through the storm--valuable data, indeed. But a problem remains: what to call them? The World Meteorological Organization maintains a list of hurricane names for every part of the world ... except the south Atlantic. South Atlantic hurricanes need names. Somebody somewhere, probably, is making a list.