Coming In Strong On Your AM Dial 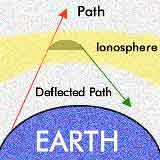 The AM radio dial would be nothing but chaos and noise without a very basic rule - turn down the power at night. The Federal Communications Commission (FCC) controls and regulates the airwaves in the United States. One important rule requires many AM stations to cut power or shut down altogether each evening. This is due to some basic physical properties of the upper atmosphere called the ionosphere that is many miles above the earth's surface.

The ionosphere is relatively thin and affected by a steady stream of solar particles and radiation that pelt it day and night. During the day, it is not very reflective and AM radio waves, tend to bounce along the ground up to 100 miles (160.9 km) from the broadcast tower. The further away from the transmitter, the weaker the radio signal. At night though, it is a different story. The ionosphere becomes highly reflective. This allows AM waves to bounce off the ionosphere and travel great distances through the atmosphere, hundreds of miles in fact. Without some night-time curbs on AM stations, a Boston station could be knocked out by a stronger station in Chicago, or farther.