A Map of the Sky 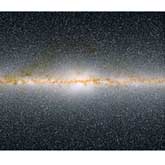 Niagara Falls, the Grand Canyon, Old Faithful... we know they're spectacular sites, but how did we find out about them? Early explorers took the time to map out the United States and as a result, you know where to go on vacation for the best natural wonders. That's the idea behind 2MASS: astronomers mapped the night sky and looked for the hottest infrared spots to study. 'For scientists, this computerized data represents a quantum leap from earlier infrared surveys,' said Roc Cutri, project scientist on the 2MASS endeavor. In fact, infrared sensors used in this survey are 100 million times more sensitive than those used the last time the infrared sky was mapped in 1969.

2MASS stands for 2-Micron All Sky Survey, a reference to the 1.25-, 1.65- and 2.17-micron wavelengths which were imaged during the project. Looking at celestial objects in the infrared allows astronomers to see past the interstellar dust which sometimes obscures them in regular observations. The same is true for very cold objects in space. They may not be visible, but they still radiate a small amount of heat so they can be seen in the infrared. Two telescopes were used for the project: one at Mount Hopkins in Arizona for the Northern Hemisphere, and another near Cerro Tololo, Chile, to cover the southern half of the sky. Overall management of the project was undertaken by the University of Massachusetts, while the Infrared Processing and Analysis Center (IPAC), operated by NASA's Jet Propulsion Laboratory, was responsible for the processing of data received.

The project was completed in March of 2003, and scientists released over 4,000 gigabytes of images covering 99.99% of the sky. The map has led an international team of researchers to discover Canis Major, the closest galaxy to the Milky Way that was hidden before 2MASS unveiled it in the infrared survey. 'It's like putting on night-vision goggles,' said Rodrigo Ibata of the Strasbourg Observatory, part of the team that found the new galaxy. 2MASS has also opened up a treasure trove of new targets for NASA's orbiting Spitzer Space Telescope and the Keck Interferometer, based on the Mauna Kea volcano in Hawaii. Both use infrared technology to provide images that open up new worlds at the edge of the universe.