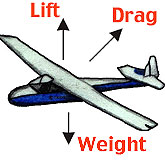 A glider is a special kind of aircraft that has no engine. Paper airplanes are the most obvious example, but gliders come in a wide range of sizes. Toy gliders, made of balsa wood or styrofoam, are an excellent way for students to study the basics of aerodynamics. The Wright brothers perfected the design of the first airplane and gained piloting experience through a series of glider flights. These aircraft were similar to modern hang-gliders and were launched by running off a hill. More sophisticated gliders are launched by ground-based catapults or are towed aloft by a powered aircraft then cut free to glide for long distances and for a long period of time before landing. The Space Shuttle flies as a glider during reentry and landing (the rocket engines are used only during liftoff).

Compared to a powered aircraft, we see that a glider has only three main forces acting on it: lift, drag, and weight. Because gliders carry no fuel or engines, they are usually lighter and simpler than powered aircraft. In order for a glider to fly, it must generate lift to oppose its weight. To generate lift, the glider must move through the air. But the motion of the glider through the air generates drag. In a powered aircraft, the thrust from the engine opposes drag. The glider, however, has no engine to generate thrust. With the drag unopposed, the glider quickly slows down until it can no longer generate enough lift to oppose the weight. So how does a glider generate the velocity needed for flight? The simple answer is that a glider trades altitude for velocity. It trades the potential energy difference from a higher altitude to a lower altitude to produce kinetic energy, which means velocity. Gliders are always descending relative to the air in which they are flying.

How do gliders stay aloft for hours if they constantly descend? The answer is that they are designed to be very efficient, to descend very slowly. If the pilot can locate a pocket of air that is rising faster than the glider is descending, the glider can actually gain altitude, increasing its potential energy. Pockets of rising air are called updrafts. Updrafts are found when a wind blowing at a hill or mountain has to rise to climb over it. (But be careful! There may be a downdraft on the other side!) Updrafts can also be found over dark land masses that absorb more heat from the sun than light land masses. The heat from the ground heats the surrounding air, which causes the air to rise. The rising pockets of hot air are called thermals. Large gliding birds, such as owls and hawks, are often seen circling inside a thermal to gain altitude without flapping their wings. Gliders can do exactly the same thing.