A Ring Around a Dying Star 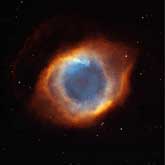 In November 2002, sky watchers were viewing the glow of meteors from the Leonid meteor shower burning up in Earth's atmosphere. They had been anticipating this celestial light show for months, expecting to see hundreds, possibly thousands, of meteors from a wayward comet light up the night sky. Engineers controlling NASA's Hubble Space Telescope had been anticipating the meteor storm, too, but for a different reason. They had to plan how to protect the telescope from a chance impact. Their plan was to turn the telescope's precise mirror away from the stream of comet debris. When they did so, they allowed Hubble to catch another kind of light show, a glowing donut-shaped object called a planetary nebula. A planetary nebula is not a planet but a dying star that has puffed glowing rings of gas into space. The closest and largest planetary nebula to Earth is the Helix nebula, located 650 light-years away.

During the Leonids, Hubble was pointing in the direction of the Helix. So clever Hubble astronomers took advantage of the opportunity by using the Advanced Camera for Surveys to view the nebula. They couldn't squeeze the entire nebula into one or even two snapshots. That would be like trying to squeeze the entire Grand Canyon into one or two pictures. Astronomers used Hubble to take pictures of different regions of the Helix, and then pieced them together like a mosaic to make one photograph. But that still wasn't enough. They had missed some of the nebula's edges. So they combined their mosaic with a wider photograph taken with the Mosaic Camera on the National Science Foundation's 0.9-meter telescope at Kitt Peak National Optical Astronomy Observatory.

The final portrait offers a dizzying look down what is actually a trillion-mile-long tunnel of glowing gases. The glowing tube is pointed nearly directly at Earth, appearing more like a bubble. A forest of thousands of comet-like tentacles embedded along the inner rim of the nebula points back toward the central star, which is a small but super-hot white dwarf that seems to float in a sea of blue gas [white dot in center of nebula]. These tentacles formed when a hot 'stellar wind' of gas plowed into colder shells of dust and gas ejected previously by the doomed star. These comet-like tentacles have been observed from ground-based telescopes for decades, but never have they been seen in such detail. They may actually lie in a disk encircling the hot star, like an animal's collar.